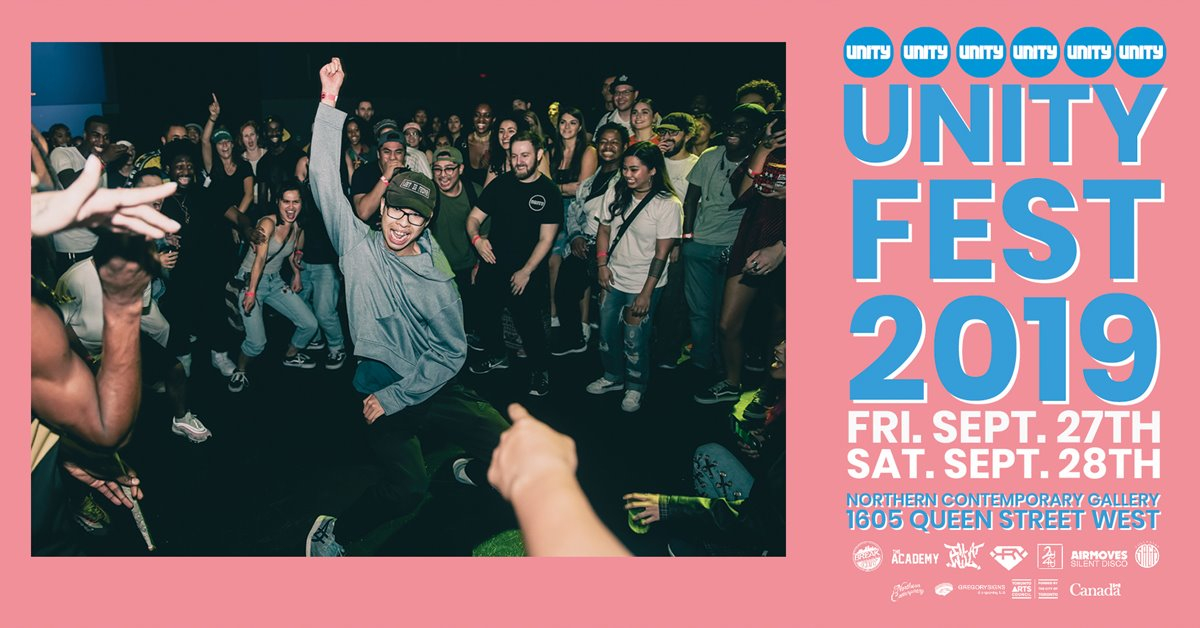 Info:
Join us on Friday, September 27th and Saturday, September 28th for the 2019 Unity Festival at The Northern Contemporary Gallery located inside the historic Parkdale Theatre building at 1605 Queen St. West.

Partnering with The Academy, a boutique concert and events presenter with a focus on music discovery and artist development, we continue to present an original roster of live performances.

REBELS DE LA SOUL will host the preliminary rounds of the “777 - GLOW UP”, an event that consists of three 7 to Smoke categories: dance, emcee and beatbox. The “GlowUp” is the culminating point of the event when the 3 winners of each category team up and get to battle the 3 judges in a 3v3 exhibition battle.

LOST IS FOUND, a multi-disciplinary arts collective curating inclusive spaces for artists to express themselves freely, will stage their ever popular CHEMISTRY series. CHEMISTRY is an experimental dance battle where contestants from all dance forms are randomly paired and must coordinate a routine on the spot. The intention is to expand creativity without limitation, take risks, and create something magical.

Inside the gallery, influential artists Anthony Gebrehiwot, Malcolm Emilio, Montreal’s Monk E, and festival coordinator Andycapp, will be exhibiting a multi-media installation focused on race and displacement , while Unity’s lead graffiti artist PHADE will be painting a large original mural on the side of the gallery.

Day Two focuses on the final rounds of the 777 - GLOW UP and CHEMISTRY BATTLES and a return to Unity’s dance roots with a multi-city breakdance battle hosted by 2U4U, a monthly showcase series that is dedicated to the development of the street dance community and raising the skill level across all street dance styles to make Toronto the leading city in the country. Dance crews from Montreal, Ottawa, Waterloo and London will compete against the top dancers from Unity’s weekly breaking programs with music provided by a Montreal legend, DJ Benny Lava.

Joining the art installation in the gallery room is the immensely popular Silent Disco presented by Airmoves and In Spades Co: move away from the concept of loud music in a night club, put on a set of wireless headphones, and experience live DJ’s. It's super social with a spin, just lower the volume or take the headphones off to talk. How you move is up to you.
Date:
September 27, 2019 (18:00) - September 29, 2019 (01:00)