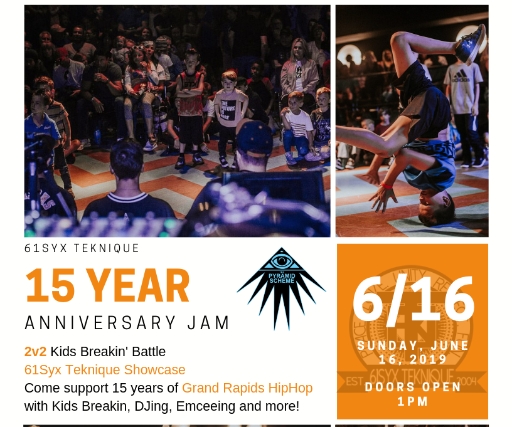 What a better way to come celebrate 15 years of Grand Rapids number 1 Breakin crew. Over the past 15 years, 61Syx Teknique has helped spread the positive message and influence of HipHop across the Globe. Dancing in cyphers and on stages large and small, passing down their knowledge to up and coming Bboys and Bgirls since 2004. Come share this moment with us!!!! Peace and love!!

Where: The Pyramid Scheme (WHERE ELSE?!)
68 W Commerce
Grand Rapids, MI

SPECIAL “BREAK DAD” FATHERS DAY BATTLE
Dads dance off, and the top two will battle with their son/daughter in the final battle!